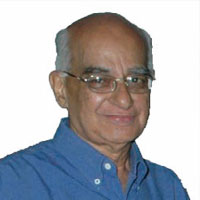 KAMU IYER in practice with Architects’ Combine since 1960, has built extensively in Bombay and other parts of India. His practice covers a wide range of projects like low income housing, educational and institutional buildings and campuses and research facilities etc. His articles and works have been published in various journals and magazines. A selection of his works has been published as a monogram titled, “Quiet Conversations: the Architecture of Kamu Iyer”.

He is the editor and an author of Buildings That Shaped Bombay: Works of G.B.Mhatre. He has co- authored Four From the Fifties- Emerging Modern Architecture in Bombay as well as Build A Safe House With Confined Masonry. His latest book, BoOmbay: From Precincts To Sprawl recreates the city’s genealogy through its built form and spaces. He has been associated with teaching at various schools of architecture. He has been on jury panels for several public competitions.

In the present essay, Kamu Iyer joins the discussion on the often fraught relationship between an engineer and an architect in a building project. The essay is written in response to and in extension to the Practice essay published in Tekton, volume 3, issue 1, March 2016 – “Running a Structural Engineering Practice”, by Alpa Sheth, a noted structural engineer from Bombay.

In her essay, “Running a Structural Engineering Practice”, published in Tekton, volume 3, issue 1, Alpa Sheth has raised some pertinent questions to ponder over. In this essay, I attempt to discuss a few of them. She starts by wondering if the state of practice today has reduced the role of the structural engineer to that of a technician. One can say that the roles of the architect and the structural engineer in a project are only vaguely defined as are also the different aspects of a project. The architectural design and its details, the civil engineering and its specialised structural design aspects overlap so much that the lines between them are blurred. This brings about some ambiguity in responsibilities, share of credit or discredit and professional charges for each member of the team. Architects take the lion’s share of the credit, acknowledging, often grudgingly, the part played by other members of the team.

Is this a present day phenomenon or was it so from the time an architect was brought in to design more than just the facade of a building? In India, the architect as a professional came with the British. Till then the master builder designed and constructed the building. He knew the materials he worked with, their properties and potential. Buildings, even public ones, were built with load bearing walls, wood joists and boarding or stone slabs. The British introduced cast iron columns, steel joists and jack arch floors or brick vaults. Buildings constructed in the late nineteenth and early twentieth centuries were mostly designed by engineers who had a sense of architectural design. Likewise, architects had sufficient knowledge of structure and behaviour of materials to enable them, in small buildings, to size structural members. Often they depended on the wide experience of the builder.

Why is there a Dichotomy? Engineers then were trained in many aspects of civil engineering, which along with structural design of buildings included architectural design
and drawing. The training was comprehensive and a student was exposed to a wide range of engineering issues. Likewise, architects were exposed to engineering aspects of building. The Public Works Department (PWD) in British times standardised and codified construction practices. “PWD Handbook” compiled by Capt. Fredrick Marryat was the first manual for reference by architects, engineers and students of architecture. But the handbook, in two volumes, did not include structural design as a separate section because it was not a specialised branch of civil engineering. It was as important as construction and its code of practice. After Independence, P.N. Khanna, in his almost encyclopaedic handbook of civil engineering, added a section on design of RCC structures. With RCC becoming the most preferred system of constructing the shell of a building, the structural engineer arrived as a specialist leaving the other engineering functions to be fulfilled by either the architect himself or other specialists appointed for the project. The edges between the architect’s role and that of the structural engineer was being drawn, subtly
in the beginning and harder later. One was a generalist while the other a specialist and both, needlessly, looked at projects through their own prisms. The dichotomy was entirely perceptual.

After all, both deal with the same things- order, harmony and proportion, principles that are abstract and yet real. Pier Luigi Nervi, in a lecture at the Institute of Engineers in 1959 said, “Design and proportion comes first. Maths comes after and that too for checking what you have done.” H.G. Mahendra, a civil engineer of an earlier generation, used to tell architects with whom he was associated in projects, that proportion was his concern too. He would say that the correctness of a structure would show in its proportions also. In other words, a structure has not only to be right; it also has to look right. It’s only then that it works. What this engineer was saying found an echo in the words of a professor who told his students at the Sir J. J. School of Architecture, “ Only a building that satisfies the mind and the eye can aspire to qualify as architecture.” The similarity in the conceptions of both shows that there was no difference fundamentally.