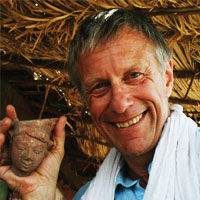 Adam Hardy is Professor of Asian Architecture at The Welsh School of Architecture, Cardiff University, UK, where he runs the research centre PRASADA (www.prasada.org.uk). Adam studied Architecture at Cambridge University and worked in architectural practice in London, Paris and Bristol before visiting India for the first time in 1981. This visit ignited his passion for Indian temple architecture, steering him into the academic world and a PhD on the temples of Karnataka, and absorbing him ever since. His many publications on the subject include Indian Temple Architecture: Form and Transformation (1995) and The Temple Architecture of India (2007), and Theory and Practice of Temple Architecture in Medieval India: Bhoja’s Samaranganasutradhara and the Bhojpur Line Drawings (2015). He has been able to apply his understanding of traditional architecture in the design of temples in the UK and, recently, for a new temple in Hoysala style near Bangalore. He edited the journal South Asian Studies from 1999 to 2015 and is currently President of the European Association of South Asian Archaeology and Art.

Typology is an essential aspect of Indian temple architecture. It is also a central approach to the study of the huge corpus of edifices built in India during the period of classical temple building activity from 5th to 13th century. The ancient and early medieval texts describe their built form in terms of a genealogical hierarchy of types. It can be robustly argued that the schools of temple builders themselves conceived in terms of types to define and evolve their respective styles. The geography of India lends itself to distinct evolution of typological styles in different regions. The early modern scholarship which did not have access to the vastushastra texts began by making such a distinction between Northern and Southern or Dravida style. The 20th century scholars however seem to have searched for meaning in the spiritual goal of the architecture, and in other instances explored the sastra texts for its native terminology. There is also a contemporary interest in iconography on the walls and the search for its basis in the philosophy of the sect of the patron. In all these research paradigms, the work of Prof. Adam Hardy stands out for its purely architectural approach that brings focus back to typology to explore the evolving practices of temple builders in time and place. His meticulous drawings and analysis of the built form has enabled him to decipher the language of the corpus. He has successfully exposed the finer grain of typological evolution to open new avenues for understanding temple architecture and showed us, in Dr. G. B. Deglurkar’s words, how much is left to be done while we were almost content with our achievements.

SAYED
How did you come to choose the subject of Indian temple architecture as your lifelong project?

HARDY
This is the one that is asked to me all the time and I ought to have a very clever and easy answer to it, but I still haven’t. I went on a holiday to India and got obsessed with the subject. I suppose, as I think about it, there must be something exotic. When I started, India was exotic to me and now I like to think it as familiar; and Indian architecture too. So, there was probably an attraction of some other when I started, but then, before I came to know, but I doubt when I came to know, I felt I could see things that I understood. I read books and I didn’t find those things (in them), so I got more and more interested. There was also nothing more complicated than finding this architecture beautiful and finding it directly sensuous as well as intellectual and spiritual. There was probably also the looking for the meaning of life. I still haven’t found it, but there was a feeling that there is some kind of truth embodied in these buildings. And also, I was thinking about it today: I am very fond of gardening. I like plants and flowers. I know it is very naive and unsophisticated to say that, to compare human artefact with nature, but there is something about Indian temples which I think has the same appeal as natural forms. The huge variety and permutations on certain particular themes, and the sense of growth I talked about, that sort of naturalness of the Indian temple architecture is one of the things that just attracted me from the start.