On 16 June, we bid adieu to Charles Correa (1930 – 2015), one of the first generation Indian Masters in post-independence India. Correa began his practice in Bombay in 1955, as a young architect freshly returned from MIT, and continued to build till his last- his latest was the Ismaili Centre in Toronto.

“Charles Correa- India’s Greatest Architect” was how banners proclaimed in the lobby of the RIBA headquarters in London, where a retrospective of his work was held in 2013 to celebrate the creation of the Correa archives. That Charles Correa was India’s greatest architect is arguable but the range of his work and the principles that he articulated across them are unarguably most influential among the architects of his generation.

Correa was a communicator par excellence- he taught, delivered public lectures, gave interviews and wrote about the many issues and themes of his times. He inspired the next generation of students and architects not just through his work but equally with the values he articulated in his spoken and written words.

He marvelled how “…Man, since the beginning of time, has always used the most inert materials like stone and brick and wood to express the invisibilia that move him”.1 The ‘ritualistic pathway’, the ‘empty centre’, open to sky spaces or ‘nonbuilding’ and an overarching notion of ‘architecture as metaphor’ are what he sees as principal concerns in his work. Through these principles, Correa sought a distinctive Indian modern- one expressive of its time as well as reflecting the timeless patterns of living and local climate. In fact, this becomes an ever-present credo in his designs which he terms as “form follows climate”.

Correa designed a number of large scale public projects that have become iconic. However, for this editor, it is the housing projects ranging in scale from private houses to group or mass housing that exemplify all his principles in various subtle ways. Correa’s social concerns and belief in the cities of India are articulated in his report for National Commission on Urbanisation2 and an ‘Urban Manifesto’3 which reflects his attitude towards the city and in them his hope for the future. He had expressed his frustration over the mess in our cities several times and yet he had faith in the cities of India. We offer our tribute to Correa, and remember his work and legacy and celebrate his vision of architecture that was both inclusive and expressive.

In this issue of Tekton, we present the following:
Patrick Lamson-Hall in his essay calls our attention to the inevitable and rapid growth in urban population, especially in the developing world. He lays out an argument for preparing adequately and well in advance to accommodate this growth. Further, he describes a four-fold strategy for the city planners to achieve positive, inclusive and equitable results. Lamson-Hall is a research associate with the Urban Expansion project of the NYUStern initiative and as its representative has set up the Urban Expansion Observatory (UXO), at the Mahatma Education Society, New Panvel.4 The mapping work carried out in the observatory is expected to provide significant indicators of growth prediction for 200 cities in the world.

Kanak Tiwari and Zeeshan Ibrar make fascinating associations about Edward Bellamy’s sci-fi novel Looking Backward 2000 – 1887 with formative ideas in urban planning in the early 20th century. This novel published in 1888 and re-printed several times presented an urban utopia that influenced the works of wellknown urban theorists. In their paper, the authors argue that seemingly fanciful or utopian ideas of today have a potential to raise hopes in a better urban future.

Tejashree Lakras in her paper analyses the sacred landscape of Tuljapur, Maharashtra, India. Lakras has mapped this landscape of pilgrim paths connecting distant shrines located in the region to the revered shrine of Tulja Bhavani in the town proper and forming sacred places along the way. She comments upon the distinctiveness of such places emerging out certain traditions whose forgotten relevance in turn causes a lamentable state of neglect.

Amita Sinha in her essay outlines evolving paradigms of design theory and methods. Sinha carries out a detailed review of two volumes recently published on design thinking. The first being The Universe of Design: Horst Rittel’s Theories of Design and Planning by Jean-Pierre Protzen and David J. Harris, which features collected writings of Rittel- an influential theorist who critiqued the linear design methods in favour of “design as wicked problem”. The other volume, Non-Essential Knowledge for New Architecture, edited by David L. Hays brings together essays on cutting edge design theories.

In the ‘Dialogue’ section, we extend the discourse on design thinking in a conversation between David L. Hays and Smita Dalvi centred around design pedagogy. We explore issues of disciplinarity, innovation, open-ended and experiential modes of design thinking, role of history and theory and much more that excites and informs how we teach design. Hays, a theorist, historian, teacher and practitioner elaborates on many of his concerns such as lateral knowledge, non-essential knowledge, grounded speculation and resilience while recounting several experiments he carried out in his teaching practice.

In the ‘Practice’ section, we feature an essay by Sanjay Mohe, a founder of the Bangalore based practice – Mindspace. Mohe is known for his sensitive handling of space and light and believes in architecture as an outcome of sustained rigour and passion for design. In his essay, Mohe narrates the story of his recent project of IIM Classroom Block that has many twists and turns and illustrates the virtue of supreme patience in order to create worthwhile outcomes for all concerned.

We also review two books written by architects known for incorporation of vernacular in their respective practices. Random Rubble: A Reader on the Vernacular by late R.L. Kumar is a collection of essays full of radical ideas whereas Green is Red by Anil Laul is a complex exhortation for simple common sense to create sustainable built environments. Both books present us with a contrarian voice in a general environment of corporate developmentalist mindset.

For a robust discourse in all matters of society including design and planning it is essential that for every dominant view, we give space for a dissenting voice. The current buzz in the area of urban development in India is ‘smart’ cities. It is so far not very clear what is intended in this policy initiative. The jury is out on whether it is just a catch-phrase for shiny corporate islands and gated communities (as critiqued by many experts in urban planning) or a panacea for our ailing cities. In this issue, Tiwari and Ibrar have, based on Bellamy, created a litmus test on a vision of better urban futureinclusive, dealing with problems of poverty, shelter, public health and utilities. Lamson-Hall suggests this is possible only if we make room via planning for urban expansion- not exclusion. We wonder what Charles Correa, designer of a new city himself would say about this current obsession. It is at times like these we miss his sane voice the most.

1 In an essay in the book brought out to accompany the RIBA exhibition, Charles Correa: India’s Greatest Architect, London: RIBA, 2013.

2 Charles Correa was appointed the chairman of The National Commission on Urbanisation, 1985 – 1987, constituted by the then Prime Minister of India, Rajiv Gandhi. The commission prepared reports on a number of key issues such as city management, urban poverty, mass transportation, energy, water, sanitation etc.

3 A three point manifesto – it can be accessed in Charles Correa, Housing & Urbanisation, Mumbai: UDRI, 1999.

4 More about the Urban Expansion Observatory, its objectives and activities can be found here: http://uxo.mes.ac.in/ 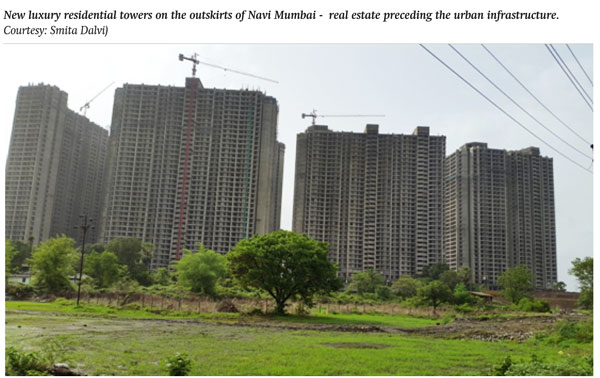