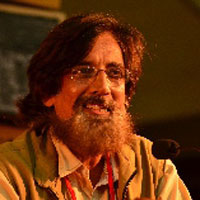 Sanjay Mohe Mohe is a founder of the nine year old Bengaluru based practice-‘Mindspace’. Prior to that Mohe has had a working association of 22 years with Chandravarkar and Thacker Associates (CnT), Bengaluru’s well-known firm, besides years spent working with Charles Correa in Mumbai and a work stint in Saudi Arabia. A graduate from Sir JJ College of Architecture, Mumbai, Mohe’s work spans a spectrum of projects – Research Laboratories, Knowledge Parks, Campus Designs, Factories, Beach
Resorts, Libraries, Corporate Offices, Hospice and Residences. A familiar face adorning many architectural forums and talks, he has a number of awards to his credit. Some of them include, the Golden Architect Award by A+D magazine, Spectrum Foundation Architecture Award -2009, J. K. Cement’s Architect of the Year Award – 1991 /1999 /2001 /2004 /2007 /2008/2013, the Award of the Journal of the Indian Institute of Architects in 2002, ar+d International Annual Award of Architectural Review -1999, London and d’line, for JRD Digital Library Bangalore, Gold Medal from ARCASIA (the Asian Forum for Institutes of Architecture – 1998). His projects have been featured in many architectural magazines and journals.

In this essay, Sanjay Mohe describes a relatively unknown trajectory of a projected completed last year inside the IIM Bangalore campus. In this re-telling are many lessons for designers about factors that are generally assumed to be external to a project but are in reality quite integral in the way they influence the outcome