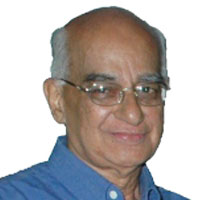 Kamu Iyer graduated in Architecture from Sir J.J.School of Art, Bombay, in 1957.

In practice with Architects’ Combine since 1960, he has built extensively in Bombay and other parts of India. His practice covers a wide range of projects like low income housing, educational and institutional buildings and campuses and research facilities etc. His articles and works have been published in various journals and magazines. A selection of his works has been published as a monogram titled, “Quiet Conversations: the Architecture of Kamu Iyer”.

Kamu Iyer has had an abiding engagement with the city of Bombay where he grew up, studied, taught and practiced architecture. He has written extensively on its architectural and urban history. He is the editor and an author of the book, “Buildings That Shaped Bombay: Works of G.B.Mhatre”. He has co- authored “Four From the Fifties- Emerging Modern Architecture in Bombay” as well as “Build A Safe House With Confined Masonry”. His latest book, “BoOmbay: From Precincts To Sprawl” recreates the city’s genealogy through its built form and spaces.

In the present essay, Kamu Iyer chooses one project among many such institutional projects from his long and ongoing career. He recounts the story of its journey and provides a glimpse into his creative processes. He adopts the approach of diagram- an approach that he has used evocatively in his books about Bombay’s architecture.