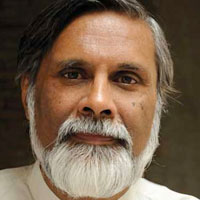 Ashok B. Lall is the principal at Ashok B. Lall Architects, Delhi. Among India’s most respected architects, he has been a pioneer in formally integrating sustainability into his architectural works – decades before the term attained significance.

He studied architecture at the University of Cambridge UK and the Architectural Association, London. His practice, established in 1981, is committed to principles of environment sustainability and social responsibility. The firm has won a number of awards and its work has been published widely. Among several notable accolades, Mr. Lall has been nominated for the prestigious Aga Khan Award for Architecture twice and served on the international Holcim Foundation Jury thrice.

Engaged in architectural education since 1990, he has developed curricula and teaching methods to address environmental issues. He has published many articles and presented papers on environmentally sustainable design while being an active member of institutions and groups promoting awareness and building competence in sustainable design of buildings. He has been invited to present his work on sustainable design for a developing world at various for a in India and internationally, including the UK, Australia, Switzerland, Egypt, Indonesia, Sri Lanka, Nepal, Uganda, Iran, Philippines and Mexico. He is presently Design & Technology Chair at KRVIA, Mumbai. His current interest is in developing strategies for sustainable urban development in the context of rapid urbanization.

In this essay, Ashok B. Lall throws open a discussion to rethink in the context of today’s changed scenario, the values and purposes of creating architecture. He expresses a desire to both expand the scope of nomenclature of architectural design and the ambit of its professional categorization by bringing in the idea of trusteeship in the way a designer needs to function.

An invitation to Discuss Architectural Design
Can we engender a discussion about the values and purposes of architectural design by thinking of dissolving the words “architecture” and “architect” into the phrase “built environment and design professions engaged in its making”? Many of us “architects” would agree that this phrase provides a more real and a more appropriate frame of reference than the term “architectural design” to discuss our work in today’s world. Indeed, the renaming of schools of architecture as “faculties for the design of the built environment” the world over confirms this shift in the contexts in which the architectural profession finds itself working today. This view of the architectural profession has its genesis in the Modern Movement in the West at the beginning of the twentieth century. Its truth and foresight were aptly acknowledged in the naming of the Centre for Environmental Planning and Technology (CEPT) at Ahmedabad, under B.V. Doshi’s leadership, almost half century ago.

Seen from this broad perspective, the architect as philosopher-artist dependent on the indulgent or generous patron would shift to the periphery whereas the design professional wrestling with the real world of rapid urban transformation would occupy our field of vision and become its focus.

Seen from this broad perspective, the architect as philosopher-artist dependent on the indulgent or generous patron would shift to the periphery whereas the design professional wrestling with the real world of rapid urban transformation would occupy our field of vision and become its focus. I am thinking particularly to the fast-changing scenario here in India where the processes of rapid urbanization and urban development will determine a significant aspect of the quality of life for 40% of the nation’s population that will be living in cities by the next decade.

Profession as Trusteeship
While I would happily dissolve the identity of the architect into a greater broth of “designers of the built environment”, adding to the broth a vital and distinctive flavour (more on this later), I find myself protecting the status of “profession” zealously. In the project of Modernity, professions are distinguished from trades and guilds. In this scheme, many of the popularly acknowledged professions of Modern India–law, medicine, teaching, engineering, architecture etc. are deemed to have a tacit social contract – a contract of trusteeship.

Each profession endowed with its specialized knowledge and skills is entrusted by society to serve and protect the general good. Each profession becomes a critical agent of change and development through the individual actions of the professional, and more importantly, in the sum of its impact as a collective on the nature of change and development. There is an important assumption that underlies this tacit contract. The contract assumes that the profession is aware of and knowledgeable about social needsand priorities, about the implications of the processes of change on available wealth and resources, and on the social and environmental infrastructure – on which security, well-being and enjoyment of life rest. It is assumed that the profession is actively engaged in developing this awareness and knowledge and that through this process it continually evolves and defines its specific tasks and roles. The notion of trusteeship acknowledges the complex and specialized nature of professional knowledge. The responsibility of understanding the potential as well as the implications of professional conduct in the light of such knowledge rests squarely on the shoulders of the professional. And this responsibility transcends the specificities of contracts of professional service. The profession, as a collective, establishes its values and responsibilities as trustee.