Memorabilia of a Practice

The architectural practice of post-independence India has gone through an evolution. What began with the most idealistic contemporary form of the 1950s through various regional and non-regional influences has now become a complex pursuit seeking validity. Today, we see a struggle to expand the horizons of architectural practice and to validate it as a discipline which can contribute to various socio-cultural issues within the urban fabric. Not that the ideal has vanished completely, but is under a threat with the rigorous growth of urban centers and their inherent complexity. For the novice it has become essential to assert an identity and to find one’s own niche. At this juncture, a monograph of Hasmukh. C. Patel’s architectural practice composed and edited by Catherine Desai and Bimal Patel will provide a guiding light. Among the various attempts recently
made to document and archive post-independence architecture in India, this monograph is the one which can be used as a codebook of architectural practice.

Patel’s practice remained in a modernist idiom, an image of austerity influenced by the Gandhian principles. A practice that began a decade after the independence and in the wake of high modernist ideals, Patel’s architecture brought in a charm and a promise of defining new architecture in India. Inheriting a strong understanding of building construction from his father and later the exposure to the modern design thinking in Cornell University crafted a humble but ambitious architect. What you see quite evidently is the integrity with the profession yielding flawless architecture in almost every inch of the built space with the careful adoption of the modern form. No wonder, his buildings talk as he wants them to rather than theoretical gibberish. The photographs in the book present a nostalgic image of Ahmedabad, seen through Patel’s architecture, as a play of light and shadows in pure geometric form. 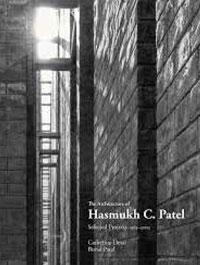 Based in Ahmedabad, the thriving industrial city provided Patel an ideal landscape of economic growth and willingness for the new. It resulted in a bustling architectural development of the city to which Patel along with other architects of his generation such as B.V. Doshi and Anant Raje contributed immensely, almost sculpting an ideal of how the modern can be woven in an intricate traditional fabric of the city. In this movement of defining what can be Indian architecture, Patel’s works show a consistent language of stoic formalism. The pallet of works presented in the catalog shows a vast range of projects in varied scales exactly depicting this stable and composed approach.

Beginning with the early sixties the book covers almost four decades of practice, a handsome compilation of carefully chosen and categorised projects supported by essays and interviews. The projects are categorised by scale and are presented in chronological order, giving us a clear perspective of Patel’s practice as it grew over the years. Each project is described in brief, giving hint to the design approach and also elaborating construction challenges. Illustrious drawings, some of them from the original hand drawn portfolios are a treat to the eye. The book presents enormous number of archival photographs lovingly preserved which help us to understand how the buildings worked for people.

The scale of projects begins with houses owned by bourgeoisie entrepreneurs who chose to settle in the suburbs of the city. Through the persuasive photographs one gets a gist of a tropical Indian home fluently portrayed in the modern lifestyle and form. The schools and hostels are as homely and intuitive. The monumental banks and commercial complexes are a pleasure to see in drawings, project reports and photographs. The Sabarmati River Development Project is proudly included towards the end. They are beyond their time and one would wonder if we have progressed further than this architectural identity since then. This is a question the architectural fraternity in India must ask themselves and it very much corresponds to the ethics of the practice which we see increasingly being compromised. Patel’s practice thrived not only because of the economic boom but because he made most of the trust bestowed on him while fulfilling the ambitions of his clientele.

In the foreword to the book, Christopher Benninger has rightly said, “He saw the meaning of greatness as gifting the entire profession a role model of what an architect should be.” The concluding essays streamline the aspect of austerity in Patel’s designs and a flawless practice. In an interview with Catherine Desai, Rahul Mehrotra stresses on how Patel defined mainstream while the challenges are faced by the present generation in achieving a similar goal. Arindam Dutta’s critical appraisal of Patel’s work is a must read as he scholarly juxtaposes the practice with the socio-economic issues prevalent then and now. Bimal Patel, Bobby Desai and Ismet Khambatta provide the in-house perspective of the practice giving us a glimpse of Patel’s world of simplicity combined with discipline. The book is worth a read for this pure pleasure and joy of seeing a meticulous journey of an architect building a memorable practice.

Neha Sayed is an Associate Professor in MES Pillai College of Architecture, Navi Mumbai and a member of editorial committee of Tekton. For almost a decade, she has done a combination of architectural practice, teaching and research. Her research interests lie in the domain of user-centered design. She is currently working on understanding the challenges of sensor driven technologies on the everyday life and ultimately architecture.