For every hundred books on architects, there may perhaps be one book (or less) on a structural engineer.

The reasons for a paucity of books on engineers are manifold. For one, they are a self-effacing lot, and shy away from any form of publicity. For another, it is a challenging if not a daunting task for even the most patient and good-natured biographer to draw out information, interesting vignettes and data from the normally incommunicative engineer. Thirdly, every piece of work (other than what is blatantly plagiarized) by an architect, for better or worse, is unique. In contrast, two structural engineers’ works, if building proportions, look and form are driven exclusively by an architect, may externally look the same even if the engineers have designed it quite differently, one having evolved an elegant, minimalistic design while that of the other may be gross and crude in comparison.

That is to say, opportunities for an engineer’s talent to manifest itself externally are few and far between. It is only the rare, creative engineer with a strong solid voice who has the temerity to lean in and engage the architect in a conversation of form and style. Ironically, some of the great international projects have been driven by innovative structural engineers, channelized and guided appropriately by a sensitive architect. Some bridges, aqueducts, stadiums, as also some tall buildings come immediately to mind. 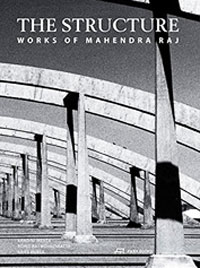 Hence, a book on the works of well known structural engineer Mahendra Raj- The Structure- Works of Mahendra Raj released last year is a welcome addition to the scarcely populated genre of such books. The book is authored by his architect son and daughter-in-law (Rohit and Vandini) along with their photographer-friend Ariel Huber. It is put together well, with an attractive coffee-table book format. Mahendra Raj is a delightful, engaging raconteur, defying the stereotypical structural engineer. I have had opportunities of attending public and private sessions with him where he regaled his audiences for hours on end with interesting anecdotes working with eccentric and difficult architects and clients. He weaves the casual (interspersed with entertaining gossip) with sharp technical insights effortlessly and smoothly. One cannot tire of hearing his stories as a young, inexperienced engineer thrown into the jaws of a towering and intimidating Le Corbusier -these find mention in Mahendra Raj’s opening essay- ‘My Initiation into Structural engineering’. But the essay glosses over much of his long journey spanning over six decades -it is uncharacteristically matter-offact, signaling to the reader that she will get “this much and no more” of a peek into his life, leaving her with too many unanswered questions. What ideology or philosophy shaped his thinking? Who were the people that influenced his life? How has he changed over time? What activities other than structural engineering engaged him? Over the past five decades, Raj has worked sedulously towards the cause of the structural engineering community. I have had interesting discussions with his past employees, now well-known structural engineers in their own right, of how he has shaped their thinking not only professionally but also in a deeply personal way.

Then there is the eternal architect-engineer conflict for shared ownership and authorship of a project which Raj has railed and rallied against for decades. I wish some of these contributions and conversations of Mahendra Raj had found their way into the book. A 1986 interview with Sanjay Prakash however does, but it appears dated and some of Raj’s prognosis has not quite turned out right- It would have been interesting to have his views after over thirty years of that dialogue on some of the very same subjects. In fact, the uninformed reader may be forgiven to surmise that not much has happened in his life in the intervening three decades. Which of course is far from the truth.

But wait, hidden almost as an afterword, sandwiched as it is between an abstruse essay and the Appendix is a crackling conversation between Mahendra Raj and architect B. V. Doshi. It displays Raj in fine fettle, talking about architects and engineers who have inspired him and his journey to seek creative, unique solutions for each engineering challenge. We see Raj gently ribbing the showmanship of the amiable architect and amusedly countering his confident but misplaced assertions. The architect in turn has an enviable ability to draw out the spark and brilliance of the engineer which all other essays in the book fall short of. It is a singularly riveting discussion between two friends, who talk about influences (Raj’s mention of Torroja, Candela and Fazlur Khan besides Nervi were particularly interesting) and projects and mathematics. This conversation if sequenced at the beginning of the book would have better contextualized many of the projects showcased in the book, the text of which appears lackadaisical in contrast.

Admittedly the book makes clear in the title that it is about “The Structures” of Mahendra Raj and does not claim to be a personal biography of the man behind them. From the format and focus of the book, it appears to be aimed at the architect reader. The structural concepts and details of the projects are too sketchy for the book to be of but passing interest to a structural engineer, when it clearly had the potential to be a robust guide or reference book for him. The choice of some of the structural drawings (Central Bank Building in Ahmedabad, for example) is confounding to a structural engineer but perhaps the sepia tint of a frayed tracing is meant to appeal to the romantic temperament of an architect reader. I suspect that if Mahendra Raj had personally authored the book for his tribe of engineers, it would not have been this book. It would be populated with simple hand calculations and sketches of how and why he came up with a concept and proportioned the members, and how he would do it differently now with concrete and steel grades of twice the strength he worked with on most of his signature projects, not to mention the highly sophisticated analysis tools now at his disposal. And would he design some buildings differently, in the light of what we now know about earthquake behavior and design? A curious engineer is left wanting for more gyan from the man who has a justifiably iconic stature in the structural engineering field in India.

But what the book does successfully, and one is thankful for it, is to demonstrate the spirit of enquiry and innovation that accompanied every new project commission. A project became an opportunity for new, aggressive thinking, for pushing the envelope even further to investigate new concepts and experiment with new hypotheses. In a world where the practice of structural engineering has increasingly become a process-driven, institutionalised business, this book provides an opportunity to go back in time and relive how a good practice could actually be. 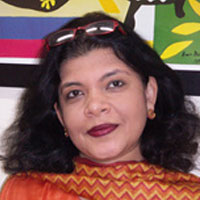 Alpa Sheth is the Managing Director of VMS Consultants Pvt. Ltd. and Partner, Vakil Mehta Sheth Consulting Engineers, Mumbai for over 15 years. She holds a Master of Engineering degree from the University of California, Berkeley. She is a Founding Trustee of Structural Engineering Forum of India and Children’s Liver Foundation, India. She was awarded the CIDC Vishwakarma Award for Industry Doyen in 2014.

Ms. Sheth has academic associations with IIT Madras and KRVIA, Mumbai. She is a Member, Research Council of CBRI (Central Building Research Institute), Roorkee, and is on Board of Governors of the Mumbai Metropolitan Region (MMR) -Heritage Conservation Society. She has been in various advisory roles to the Gujarat Government for Seismic safety since the 2001 Bhuj earthquake. Ms. Sheth has been involved in drafting codes for the Bureau of Indian Standards (BIS). She has been on numerous World Bank post-disaster reconnaissance teams, including the Great West Japan earthquake, Great Sumatra earthquake amongst others.