The Mind of an Architect Activist

“Random Rubble: A Reader on the Vernacular” is a collection of the writings of R. L. Kumar, a self-taught architect who lived and worked in Bangalore. Kumar founded the Centre for Vernacular Architecture (CVA) in 2009, which propagated the vernacular style of architecture. He worked here till his tragic and untimely death in 2012.

Kumar’s journey to the practice of architecture has not been by any means direct. He trained to be a Chartered Accountant, but went on to work for the CIEDS (Centre for Informal Education and Development Studies) Collective, and founded ‘Shramik’, a workers cooperative that sought jobs for people from the slums in the building trades. The CVA grew out of the humble repair jobs that Shramik took up when Kumar made the acquaintance of other architects from the Laurie Baker school of thought.

It is hardly surprising therefore that the author’s views are unorthodox and thought provoking for anyone from the architectural mainstream. In fact his lack of formal architectural education has been a factor in his unconventional architectural practice and the same makes him well suited to write about and critique the profession.

This compilation of essays, intended to be a Reader on the vernacular, covers issues well beyond the narrow meaning of the word vernacular as we normally understand. Kumar elaborates the scope by expanding on much wider issues. For example, language is presented as the first and most tragic casualty of colonisation. A comprehensive range of topics are covered with parallels, references and quotes from sources as varied as Anand Patwardhan, a contemporary documentary maker, to observations and notes from Alexander and his generals during their invasion of India from more than 2000 years ago. In fact the author counts amongst his Gurus as Paul Fayeraband, Ashis Nandi, T.G. Vaidyanathan, Ivan Illich, Jit Singh Oberoi and of course Gandhi. 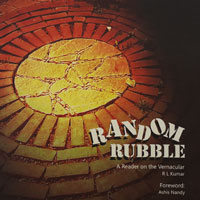 Random Rubble: A Reader on the Vernacular (2015)

The Reader is compiled and edited by Madhu Bhushan, Kalpana Chakravarti and Madhuri Rao, close associates of Kumar who knew him since his formative years and a foreword by Ashis Nandi. For the most part, the essays are brief, and have been correctly described in the introduction by Himanshu Burte as being in the spirit of a provocative and open-ended conversation.

Interestingly, the Reader begins with a reproduction of Mohandas Karamchand Gandhi’s “Hind Swaraj” or Indian Home Rule. Kumar, in his own words viewed Hind Swaraj as a scathing critique of modernity, modern institutions, modern practices and modernity in general. The Reader also ends with an extract from “The Second Dialogue on Knowledge” by Paul Feyerabend, the physicist and philosopher who carried an internal critique of science. Like Gandhi’s Hind Swaraj, this extract is also in a question and answer format, a dialogue between two protagonists. Both texts have had a marked influence on Kumar’s thinking and his work. Their placement in the Reader therefore provides a context in which to approach Kumar’s own writings.

Kumar’s eight essays in this Reader cover a diverse range and are interspersed with notes. The essays follow various structures, all of them exercises in presenting complex and often abstract ideas in remarkably lucid form. From a discussion on light, lamenting its relegation to a “service” in architectural teaching rather than a critical refection on this powerful element of architecture, to a commentary on the nuanced transition of our policies from development to globalisation as a means employed to govern the resources of the world, one finds a wealth of insights. The author views imperialism as the domination of knowledge, not just resources. He also touches upon the idea of women as special kind of citizens, and its implication on “official” architecture and “official” planning. The seminal essay, ‘What is Architecture’ is a straightforward exploration in the critical aspects, that for the writer, define architecture. What follows is an elaboration on scale, craft and regeneration. Another essay, ‘Contemporary Contempt’, evolves from seemingly ubiquitous images and words: for example, a dhaba on the Pune Bangalore Highway called the “High Tech Ethnic Dhaba”. Such amusing visuals are all too common in the Indian Kaleidoscope. To Kumar, the words are interpreted as comments on ethnicity as citizenship, obsolescence as technology and conservation as tradition. In an essay on public spaces, Kumar calls them areas of “supervised freedom”, and explores where the limits of this freedom lie.

R. L. Kumar’s writing challenges conventionally held beliefs and preconceived notions, in an original and thought provoking manner. For example, cyberspace, long believed to be a powerful tool of decentralising democracy, is completely debunked by the author. To quote from the essay, ‘Surviving the Modern Mind’, “Cyberspace ensures powerful integration of common interest corporate entities, whether it is the national security institutions or transnational corporations”. In the same essay, the author goes on to observe that “All the smart cards in the world, all the coaxial cabling and digitization does not take us an inch closer to doing away with taxes, meters, sponsors, commercials, lawyers and litigation.”

One of the incongruous things in this Reader is inclusion of blurred and inexplicably cropped photographs that bear no annotation and don’t complement the text in any way. Their purpose remains unclear, and if the pictures are of Kumar’s built work, then, one is left with a sense of dissatisfaction as had they been carefully chosen and printed, the readers would have got a concrete expression of his thoughts.

While a detailed critique of Kumar’s thoughts and writings is well beyond the scope if this review, I would definitely recommend this Reader to anyone who professes to be a thinking architect. Students of architecture today have access to vast realms of dada, yet many choose to remain completely ignorant of the wider issues that shape our society. This is in marked contrast to the angst and ferment prevalent in architecture schools of yore, where the notion of being an architect was incomplete without becoming an activist. For the contemporary students of architecture, this book is an essential reading: A glimpse of the wider discussions that for some reason, practicing and teaching architects have withdrawn from. 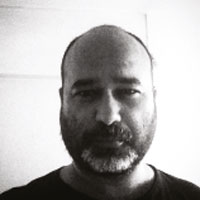 Amrut Deshpande practices and teaches Architecture in Navi Mumbai, and is a visiting faculty at the Pillai College of Architecture. He has in the past worked at the COSTFORD (The Centre of Science and Technology for Rural Development), where he worked under Shri Laurie Baker.

His practice has focused on the adaptation and propagation of Laurie Baker techniques of construction in projects located all over Maharashtra, while respecting the site-specific vernacular. He also practices landscape design, won an award in a competition and published papers.