“Does Architecture Matter?”- one of the questions raised by the recently held ‘State of Architecture’ (SOA) exhibition in Mumbai1 packs profound implications for the profession, its practice and education and its criticism. One of them is the self-perception of the profession; the other is the way society perceives it. Does the profession impact the lives of ordinary people or shape our cities in any way? A recurring point of the inaugural conference (‘The State of the Profession’) was that of the marginalisation of the profession of architecture by the state. There is a crisis of patronage, where the state has withdrawn itself and this vacuum is largely filled by profit driven corporate/ developer clients.

We need a spirited debate on the issue of this marginalisation, even perceived irrelevance. I will return to this point after introducing the present issue, as some of its content has some bearing on the discussion.

In this issue of Tekton, we present the following:
Alley D. Kelly, in her paper tracks the mission of cleaning the river Ganga since its inception three decades ago till the present iteration, analysing the challenges of the mission that so far has been ineffective in improving river water quality. Some of the major constraints described are the rent seeking behaviour in the institutions and the technological challenges of waste water treatment. She stresses upon seeking alternative solutions in waste water management, the decentralisation of decision making and citizens-led monitoring mechanisms.

AGK Menon, in his paper provides a wide ranging overview of the state of profession of architecture in India today, which is not flattering, with ample evidence of degraded habitat all around us. He raises the questions of the self-perception of our professional mandate, whether it has a wider social role beyond the project at hand and the nature of professional knowledge. He asserts that these fundamental questions need an urgent articulation as they have an impact on the “culture of building”.

Suprio Bhattacharjee in his essay speculates on the possibility of a manifesto for our future “building culture”. He alludes to the ‘Charting Vectors’ section of the SOA exhibition- a selection of projects completed in last one and a half decades, many by younger practices. Using this as a trigger, Bhattacharjee investigates the range of expressions observable in the displayed projects by exploring ‘tendencies’ inherent in them. Such an approach avoids style based taxonomies or formal/ visual dispositions. His is a valuable effort in dissecting the underlying trends in current practices, attempted for the first time with a critical eye.

In my essay on Golconde, a dormitory for Aurobindo Ashram in Pondicherry (designed and built between 1935-1945 by Antonin Raymond, a leading figure of Japanese Modernism) I argue that this remarkable building could be considered one of the earliest ‘modern’ buildings in India. The essay also situates the building within the prevailing discourse of nationalism at its time and discusses its relevance in search for an appropriate Indian Modern. The essay is accompanied by a portfolio of select drawings that attempt to document the logic of this very rational building.

The ‘Practice’ section features an essay by Alpa Sheth, a wellknown structural engineer from Mumbai, dwelling on challenges faced by her profession. Sheth draws on her rich experience of engineering practice and teaching of structure to architecture and civil engineering students to provide unique insights on the state of structural engineering education and practice, and how that impacts not just the relationship between architects and engineers but the production of good architecture itself. Her observation that good engineers increasingly prefer to work directly for the client rather than under an architect must be understood for its seriousness.

In the ‘Dialogue’ section, we feature a conversation between India’s leading conservation architect Vikas Dilawari and Mustansir Dalvi. Dilawari’s earliest projects were well-loved buildings of the Empire in Bombay, all of which are noted for his rigorous concerns for authenticity. In his later practice, his work is more nuanced, concentrating on preserving the urban fabric by attending to domestic precincts in the city, the ‘unloved’ buildings, as he refers to them. Here, he demonstrates that redevelopment need not be the result of making tabula rasa, working in extremely constrained situations of lived in buildings with the least resources.

This time, we feature two reviews. First, a review by Prof. Amita Sinha of a delightful exhibition titled ‘Outside Design’, a collateral event of the first Chicago Architecture Biennial in 2015. The exhibition consisted of installations as a series of laboratories for design experiments and explored the boundaries of different design disciplines. The other review is by Richa Sharma of ‘The Architecture of I.M. Kadri’ by Kaiwan Mehta. The publication sketches the patterns and rhythms of Kadri’s vast body of work in last five decades.

Kadri’s career in architecture, while having trained as an engineer, clearly blurred the boundaries between disciplines. That his work was not celebrated by the community of architects despite of the immensity of his contribution in the developing discourse of an alternative modernity in Indian architecture, is a travesty and points to a tribalism that ails the profession mired in territoriality. This is one of the reasons why it often fails to rise to the challenges of the changing times.

If the profession is to address the crisis of social credibility and the marginalisation of its role by the state, it must jettison its moribund ways of thinking about architecture and embrace the fluidity, dynamism of multiplicity of its interpretative practices to remain relevant. Dilawari in his interview has a very interesting remark- that learning about conservation helps in the controlling of architect’s egos, as we learn to respect the original creation. That is something to ponder about as the profession grapples with its marginalisation. Prof. AGK Menon has advocated the recognition of diversity and heterogeneity of building practices that may bring about a transformative influence on our built habitat.

We may begin by celebrating architecture that engages with the constraints of the real world and emerges productive, by regaining relevance. Alejandro Aravena, 2016 Pritzker prize winner thinks that irrelevance is a price the discipline paid for wanting artistic freedom. He asks us instead, “… to engage non-architectural issues – meaning poverty, less segregation in cities, less violence – with our specific knowledge, which is to design and do projects.”2

Finally, we join the community worldwide in paying tribute to Zaha Hadid, whose passing shocked us all. Free of all dogmas, unbound of all conventional thinking, even the forces of gravity, her work is audaciously original. While a lot has been written on her projects for which there is ample acclaim and criticism, we await the completion of several projects on floor to fully understand the import of her architecture. From all the outpouring of grief that her untimely death provoked, one noticed, just how much of an inspiration she is for budding women architects. Hadid herself was mindful of this. In an interview to CNN after being awarded the 2012 ‘Jane Drew prize for Contribution to the Status of Women in Architecture’, she said: “I used to not like being called a woman architect. I’m an architect, not just a woman architect. But I see the incredible amount of need from other women for reassurance that it could be done, so I don’t mind that at all.”3

1 ‘The State of Architecture: Practices & Processes in India’- an exhibition on post-independence architecture India curated by Rahul Mehrotra, Ranjit Hoskote, Kaiwan Mehta- held at the NGMA, Mumbai between 06 January and 20 March 2016.

2 In an interview with Justin McGuirk for Issue Magazine 067, January 2009. http://www.iconeye.com/component/k2/item/3895-alejandro-aravena

3 The interview can be watched here: http://edition.cnn.com/2012/08/01/business/leading-women-zaha-hadid/ 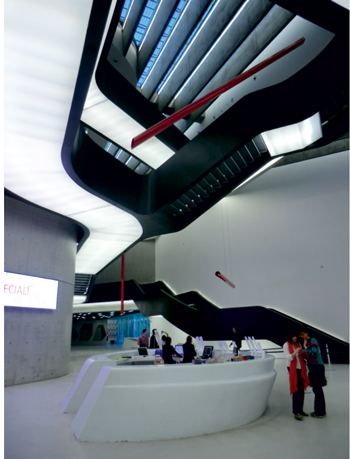