Contradictions and Complexities in Urban Conservation
Conversation with
Vikas Dilawari 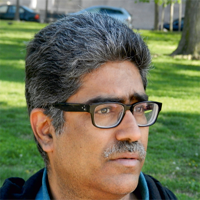 Vikas Dilawari is a conservation architect with more than two and half decades of experience exclusively in the conservation eld, ranging from urban to architecture to interiors. He obtained his double Masters in Conservation from School of Planning and Architecture (New Delhi) and from the University of York (UK).

He was the Head of Department of Conservation Department at Kamla Raheja Vidyanidhi Institute of Architecture (KRVIA) Mumbai from its inception in 2007 till August 2014. He has served in advisory roles in International Council on Monuments and Sites (ICOMOS), Indian National Trust for Art and Cultural Heritage (INTACH) and the Mumbai Metropolitan Region Development Authority (MMRDA). He is a Trustee of Indian Heritage Cities Network (IHCN) and Co- Convener of INTACH Mumbai Chapter.

Architect Dilawari has lectured and written extensively on the subject of conservation nationally and internationally.

Mumbai has been particularly fortunate in having a well established urban conservation movement for close on twenty ve years now. Right from the early nineties, several exercises in identifying buildings, precincts and making fabric assessment for conservation were carried out, and in most cases legislated. The canonical buildings that Mumbai is identied by have been attended to, and are conserved with Grade I & II Heritage listings. The cave temples of Elephanta and the Chhatrapati Shivaji Terminus have been designated as World Heritage Sites. Most of the buildings of the Raj have been duly prioritised. So much for the good news.

Of the rest, much of which far exceeds the imperial buildings, attention to conservation, whether through legislation or actual intervention has been patchy, to say the least, and increasingly becoming more difcult to achieve. Buildings that were created by home-grown architects, urban precincts that dene areas of consistent urban fabric like the Art Deco Precincts or Girangaon, the areas of the mills from the early twentieth century have all got a short shrift, not least because of the postmillennial city’s obsession with the monetisation of real estate. Newer laws and newly framed Development Control rules have further diluted the early gains of the conservation movement, while the new mantra of ‘redevelopment’ allows for vast swathes of the city’s historic past to be attened for the insertion of new global homogeneity.

Conservationists like Vikas Dilawari ght an increasingly difcult battle to get their projects realised, to preserve buildings for posterity and memory. There are only a few conservation practices in Mumbai of quality, and Dilawari is amongst the foremost. Dilawari was very forthcoming in participating in this dialogue, unravelling the several complexities and contradictions in the practice of urban conservation, especially in Mumbai.

Are there classical or canonical approaches to conservation?

Conservation as a eld in India has been following, informally or formally, the canons of the West. This is evident in the formal approach of the Archaeological Survey of India (ASI) in the manner by which they look after its monuments since late 19th century. Thereafter in late 1980’s, when the concept of conservation of built heritage was introduced, the thinking was once again dominated by the approaches from England, for