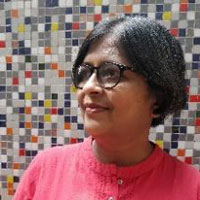 This issue of Tekton is being brought out in the middle of a pandemic that has had a devastating effect on life as we knew it. Its prolonged nature indicates that some of these effects will have a lasting presence for better or for worse. Many terms have gained a common currency such as ‘Work from Home’ and ‘Social Distancing’ – these have serious implications at the building and urban level and will have to be quickly assimilated by the policy makers and professionals in order to manage the change.

The Covid crisis has made us more aware of certain spaces that we once took for granted. The relationship between our bodies and the spaces that we are ensconced in will now take a new meaning. As a result of this forced incarceration, the domestic space or the space within our homes has now become the central space from which we access the world, from which we live, work and play. When we remain in certain spaces for a very long time as we have now been forced to do, we will have to re-examine our relationship with such spaces.

We also need to re-examine building regulations that have allowed architecture to strip down to a bare block, bereft of all that can provide a relief to the body and the mind. The soft spaces such as verandahs, balconies, corridors and courtyards – forgotten entities in our uniformly dull townscapes need to be recalled. Minimum standards that we had already begun to violate by making them even smaller will no longer be viable. Certain limits will have to be adhered to when in the future we design new spaces.

The indoors will now be where our interpersonal relationships will come into acute focus, as well as the manner in which we project ourselves into the world at large. At the same time, loneliness, boredom, anxiety, and even a certain level of paranoia will manifest itself and where we are and what we are in may alleviate or aggravate such feelings.

Strangely spaces like these bring us together keeping us at home for extended periods of time, while at the same time notions of social distancing keep us apart when in public. This realignment of architectural and urban space will be one of the key lessons from this pandemic crisis. When idea of urban as a social space was already contacting with increasing privatisation of public space and a penchant for the gated, it will require a greater push to pitch for publicness. Besides the economic and digital divide, the space divide in our metro cities was tragically playing out in the exodus of migrant workers. Whether the urban policy makers rise up to addressing the inhumanity of living conditions of poor and review their existing policies remains to be seen.

In this issue, we present the following papers and essays:

Raja Singh and Anil Dewan in their paper draw our attention to the role of architecture in healthcare facilities for contagious disease. Through a detailed literature review, they emphasise the importance of natural ventilation for effective infection control. They advocate more research into using advanced ventilation systems or hybrid ones rather than solely relying on mechanical ones. This issue has only acquired more urgent attention in the present times when we have seen the possibilities of hospital acquired infections having a crippling effect on regular medical care.

Bhagyasshree Ramakrishna presents a case study of an Industrial Design District in Milan, Italy to highlight the the process of re-adapting defunct industrial infrastructure into sites of innovation, throwing up a new typology of public space. Her detailed analysis argues for a holistic city-wide approach to urban regeneration which integrates the core heritage areas in a city with peripheral ones in a network of innovative public spaces that can function differently at different times and accommodate varying program. The lessons of Milan are quite useful for Mumbai where unfortunately we have struggled to put to appropriate use the disused textile mills infrastructure and failed to create similar public spaces, not to mention making the local communities invisible in the scheme of the things.

Sudnya Mahimkar and Seema Shah in their paper draw attention to the gender gap in construction industry when it comes to managerial and technical positions. The study explores women’s participation in terms of gap in skilled and unskilled labour, pay gap, glass ceiling and access to amenities. The paper relies on survey of real estate organisations and interviews with female professionals to conclude that a severe gender gap exists in the participation of women at the top and middle management levels. It also points to gender bias in hiring for technical positions as also vertical advancement in an organisation.

This issue’s Practice Essay looks at the current housing scenario in Indian cities from a design perspective. Sanjay Kumbhare and Sushama Dhepe recall and analyse Charles Correa’s masterfully designed Tara Group Housing in Delhi to compare its morphology with housing plans today. Their observations point to the inability in achieving similar social qualities in the current housing projects while delineating the factors that produce such inabilities. This analysis succinctly defines the current challenge for architectural profession in reconciling good design with other contradictory demands.

In the Dialogue section, we present an interview of Ray Bromley, former Professor at the State University of New York at Albany conducted by Aruna Reddi. In an expansive conversation, Prof. Bromley enlightens us on the issues of urban planning and community development, with his vast international experience, particularly of Latin America and Asia. His empathetic insights into India’s trajectory through his travel and teaching are valuable to every student of urban design and planning. He stresses that the mandate of urban planning should be such that it takes into account the real-life problems of people and socio-economic diversity and inequalities.

In the Review section, Devipriya Pillai reports on the recent book on Hindu Temples edited by Annapurna Garimella, Shriya Sridharan and A. Srivathsan. The book rescues the ‘temple’ from the pages of history books and places it in a contemporary context as lived places of worship that reflect community aspirations. The book also focuses on modern expressions in temple design, furthering our understanding of trajectory of modernism in India. There is an abundant scope to research the modernist expressions in religious architecture in the country and how they are received by the community.

Tekton Journal is now fully online. Alongside print copies, a digital version is simultaneously published on our website. The readers are directed to it where all the previous issues are available as open access. It is hoped that this will benefit students and researchers as a useful resource.

The publication of this issue coincides with observing the golden jubilee of the Mahatma Education Society, the publishers of this journal. The society that runs Pillai Group of Institutions was founded in the year 1970 by the then young educationist, Dr. K.M. Vasudevan Pillai. Under his and Dr. Daphne Pillai’s leadership it has grown as a multi-campus organisation and has gained tremendous reputation in the education field. As patrons of this journal, their contribution to the fledgling world of academic publication in architecture will be recognised by the future generations. It is a joy to dedicate this issue to their spirit of service in education.