The volume is the first comprehensive study of one of the Kumbh Melas where a large mass of faithful gather to bathe on riverbanks on auspicious occasions. These festival gatherings celebrate the event of amrit (nectar of immortality) falling on four spots on earth from the kumbh (pot) churned out of the ocean by gods and demons in mythic time. The one at Prayag or Allahabad at the confluence of rivers Yamuna and Ganga and mythic Saraswati is purported to be the largest gathering in the world, of a hundred million pilgrims coming together from different parts of India and the world to bathe, worship, and attend religious discourses. The Kumbh Mela is a huge spectacle, drawing large number of tourists and extensively covered by the media. The sheer size of the population on move and at rest in a site not larger than 15
square kilometers over fifty-five days is quite astounding and requires meticulous planning by the state and religious organizations. The South Asia Institute of Harvard University organized a multi-disciplinary team of faculty and students to map the event in 2012-13. This multi-faceted study compiled in the book form contributes to discourse on religious and social phenomena of wide interest to many academic disciplines. 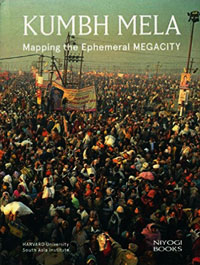 The volume is handsomely illustrated with photo essays, drawings, and diagrams accompanying chapters covering urbanism, infrastructure, public health and safety, and governance and business. Kumbh Mela, described as an ‘ephemeral mega-city’, is mapped as a dynamic spatial structure, planned, assembled and deconstructed over a twelve month period. Drawings and photographs show infrastructure—bridges, roads, electric poles, camps, toilets, barricades– being deployed, taken apart, removed to be stored elsewhere or recycled. The mappings capture the fluidity and temporal nature of the ‘pop-up settlement’ and serve as a visual record of the event where none had existed before. They would be useful in future planning of the Kumbh and are also of immense value in understanding the design process. Rahul Mehrotra and Felipe Vera draw attention to the mela project not being ‘defined in detail as a fixed plan, but something more abstract, in between an idea and a map’ (p. 400), characterized by uncertainty and indeterminacy. They believe its success lies in reversibility and spatio-temporal openness of the design process and these attributes should be adopted in planning strategies for sustainable urban development. This may be useful in designing ‘pop-up’ cities such as the Kumbh Nagri but its merit in planning for land development in permanent settlements remains to be seen.

The book describes the grid of temporary roads in Kumbh Nagri (town) dividing the flood plain of the sangam (confluence of Ganga and Yamuna Rivers) into 14 sectors where various denominations set up camp. The grid not only organized residential space, but also determined the location of police stations, fire stations, watchtowers, temporary hospitals, and other infrastructural elements. The shape of grid was itself determined by the location of pontoon bridges that in turn were built near favorite bathing spots on the riverbanks. The emphasis in text and images in the book on the temporary urban structure and kinetic architecture is at the expense of more extensive mapping of hydrological flows, wetlands, vegetation, and soils as well as agricultural use that precedes and succeeds the building of Kumb Nagri. What is not fully explored in depth is how natural processes define the metabolism of the ‘pop-up mega-city’, together with energy flows in the built infrastructural system.

The Kumbh Mela landscape is a situated event in which ebb and flow of Ganga and Yamuna, planetary movement in the Hindu zodiac calendar, and movement of pilgrims all come together in ritual celebration of the life giving powers of holy rivers. Diana Eck and Kalpesh Bhatt describe the sangam (confluence of rivers) theology and elevation of river waters to the nectar of immortality on auspicious occasions in mythology. Based upon observations and interviews with religious leaders they describe the true significance of the event in terms of sacrifice of personal wealth, comfort, and social bonds. More in-depth anthropological fieldwork would have been useful in understanding pilgrim motivation in coming to the Kumbh Mela, their perception of benefits accrued in this and afterlife, and textures of their emotional experiences. This is necessary for mapping spatial practices that shape the organization and layout of Kumbh Nagri.

Tarun Khanna and John Macomber point out that Kumbh Nagri is not a real city with an economic purpose but a temporary settlement whose urban form is determined by religious experience. While its planning and provision of services can be a guide for dealing with refugee camps and informal settlements, its costs have yet to be calculated in terms of environmental stresses. Massive debris left in the aftermath of the event testifies to the failure of ‘Green Kumbh’ campaign. Although much of the material—steel plates, pontoon tanks, tin sheets, and canvas—would be taken away and stored for use in other festival events, discarded sandbags and bamboo poles would be recycled by local communities, and reed roads would disintegrate with time and be absorbed by the river flow, not all that remained was organic matter such as toilet bowls captured in deconstruction photo essay by Dinesh Mehta. Mapping of point source pollution in air, ground, and water is necessary for long-term environmental health as is planning for its sustainable management. For example, excreta from open defecation gathered in carrels and burnt by 9000 sweepers on the outskirts of the settlement can be biodigested for production of methane gas. Similarly, the enormous quantity of flowers and other ritual paraphernalia can be composted for natural fertilizer to be used in local agriculture.

Sachit Balsari and Jennifer Leaning in their chapter call the Kumbha Mela ‘a very lucky affair’. While there was no loss of life in the mela grounds, 36 people were killed in a stampede at the Allahabad Railway Station on 10th February, 2013. While the disaster prevention program was in place at the riverbank, there was none at remote entry points. Balsari and Leaning advocate further mapping of geo-spatial data and qualitative studies of crowd behavior. A quarter million people were treated at temporary health facilities and with a team of dedicated students they were able to digitize patient data in real time (cholera pandemic began in 1817 Kumbh Mela) to monitor spread of contagion diseases but a much more coordinated effort is necessary for proper epidemiological surveillance. This has implications for the extent and quality of sanitation measures, for example provision of eco-toilets, storage facilities for perishable food in communal kitchens, and trash collection, among others.

The volume is a significant contribution to understanding the close links of Hinduism to nature, geography and self-organizing patterns of pilgrimage. The state’s successful role in providing public good through meticulous planning, and by laying down a framework in which private organizations can operate, becomes clear in the documentation of the 2013 Kumbha Mela. The deployment and deconstruction photo-essays, and the infrastructure and carrying capacity vignettes are exemplary mapping projects for understanding the improvisational and flexible aspects of the design process. The volume demonstrates that only through a multi-disciplinary endeavor can a complex cultural phenomenon be understood and planned for. The spatial aspects of religion, public health, business management, and organizational structures, have to be studied together to fully comprehend the range of issues involved in ensuring the success of the largest gathering in the world.

Amita Sinha is a Professor in the Department of Landscape Architecture at the University of Illinois at Urbana Champaign, USA. She is the author of Landscapes In India: Forms and Meanings (University Press of Colorado, 2006; reprinted by Asia Educational Services, 2011) and editor of Landscape Perception (Academic Press, 1995) and Natural Heritage of Delhi (USIEF and INTACH, 2009). Her co-edited volume Cultural Landscapes and Heritage Conservation in South Asia will be published by Routledge in 2017.