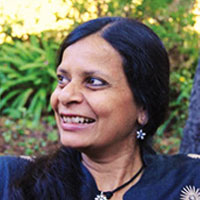 Swati Chattopadhyay is Professor in the Department of History of Art and Architecture at the University of California, Santa Barbara. She is the author of Representing Calcutta: Modernity, Nationalism, and the Colonial Uncanny (Routledge, 2005); Unlearning the City: Infrastructure in a New Optical Field (Minnesota, 2012); the co-editor (with Jeremy White) of City Halls and Civic Materialism: Towards a Global History of Urban Public Space (Taylor and Francis, 2014) and Critical Approaches to Contemporary Architecture (Taylor and Francis, forthcoming). She is currently working on her book project, “Nature’s Infrastructure: British Empire and the Making of the Gangetic Plains, 1760-1880,” for which she received a Fellowship from the John Simon Guggenheim Foundation.

Between the late-eighteenth and late-nineteenth centuries a large number of ghats or stepped landings were built in colonial cities on the Ganges to facilitate trade, leisure, as well as collection of drinking water, bathing, and religious rituals. Given the importance of the Ganges as a riverine artery for commerce and transportation, the ghats were also seen as sites of commemoration—of embedding ones name in the landscape. This article discusses one such commemorative ghat, Prinsep Ghat, in colonial Calcutta. By placing the Prinsep Ghat in the context of building ghats in the lower reaches of the Gangetic plains in Bengal, the essay argues that we must attend to the politics of claiming the banks of the river if we are to understand the role played by competing constituencies in shaping the riverfront.