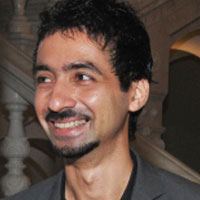 Kaiwan Mehta has studied Architecture, Literature, Indian Aesthetics and Cultural Studies; presently pursuing his PhD at the Centre for the Study of Culture and Society (through Manipal University). He is a theorist, pedagogue, author of Alice in Bhuleshwar: Navigating a Mumbai Neighbourhood (Yoda Press. New Delhi, 2009) and currently managing editor of the architecture and design magazine DOMUS India. He is also associated with the Art, Criticism and Theory as well as Architecture, Resources, and Culture Programmes at Jnanapravaha (Mumbai). He was elected as Jury Chairman for the cycle 2015-2017 at Akademie Schloss Solitude, Stuttgart, Germany, which is one of the five best residency programmes internationally across eleven disciplines.

The essay looks at writing on the city as an act and ritual of being one with the city. Writing on the city, especially the many city-biographies are not just the multiple descriptions or different voices talking about the city but they are a way in which the city is closely understood and engaged with. The city shapes itself in many forms – its physical fabric, its people, but there is also the ‘mental life’ of a city which this essay elaborates as the psychological and intellectual life of a city. Often writings, especially the three books we focus on, are much concerned about the physical development of the city, but they are constantly producing the city in spaces and events other than the built environment or are producing the close links between the built life and cultural existence of a city. The essay briefly concludes on the possibility of writing on a city as an act of developing the conscience of a city – a conscience that challenges and argues with the shape and life of a city.