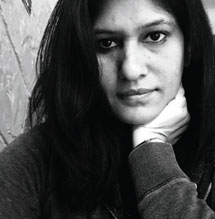 Sonal Mithal holds a PhD in Landscape Architecture from the University of Illinois at Urbana-Champaign, and a master’s degree in Architectural Conservation from the School of Planning and Architecture, New Delhi. She is Director and architect-artist at People for Heritage Concern, invested in developing research-based artistic and professional practice informed by systematic archival inquiry, political critiques, and design environments. Her work prioritizes architectural design as an active medium to contest heritage politics—formalizing historical urbanscapes as sites for informed and engaged user experience. Her art practice explores the palimpsestic nature of history and critiques the archivability as a condition of historicity, by exploiting the tensile and compressive properties of material, and has been exhibited in India, US, and Europe. Her professional work includes architectural conservation, exhibition design, and installations. She also teaches history intensive studios that critique the dominant formalist narrative at the Faculty of Architecture, CEPT University, Ahmedabad.

In this Practice Essay, Sonal Mithal weighs in on the recent controversy of the newly floated scheme of Adopt-a-Heritage by the Government of India. While doing so, she addresses the larger issue of lack of a clear conservation policy of historical monuments in the country in the absence of which credibility of public sector suffers and accountability of private sector remains vague ruling out any innovation or a way forward. She is critical of what she calls nostalgia agenda which comes in the way of bringing heritage closer to the people.

Adoption of Heritage – What is the Fuss?
How long can the practice of heritage conservation and management simply rely on nostalgia and capitalize on sentiments? Contemporary history of conservation practice in India has shown that unless the built heritage becomes a part of the contemporary society, it will remain in oblivion and hence abused. The problem is a lack of adequate interpretive strategies for making the visitor engage with the monument. The monument is always glorified as a symbol of a glorified past which must not be touched in any manner—intellectually, or otherwise. However, that creates a distance between the visitor and the monument which fails to engage the curiosity and intellect of the visitor. Can restoration strategies go beyond an almost eroding nostalgia agenda and activate the monument as a living exhibit of its own time? This question is the central one if one were to unpack and analyze the potential of Adopt-a-Heritage scheme.

Can restoration strategies go beyond an almost eroding nostalgia agenda and activate the monument as a living exhibit of its own time? This question is the central one if one were to unpack and analyze the potential of Adopt-a-Heritage scheme.

Adopt-a-Heritage is an initiative of Ministry of Tourism in collaboration with Ministry of Culture and Archaeological Survey of India (ASI) to channel public companies and individuals for providing visitor amenities at heritage sites. The public company or the individual that adopts a site becomes a Monument Mitra (friend of the monument) and is responsible for provision and maintenance of amenities. It is mandatory for the Monument Mitra to adopt sites of low visibility and low footfall, although adoption of sites with high footfall is optional. The Monument Mitra gets visibility in the monument premises as well as the Incredible India website, although the visibility design has to ensure that it does not violate the architecture, and ambience of the site, and is approved by the ASI.

Recent “adoption” of the Red Fort in Delhi, built during the reign of Shahjahan in the 17th century, now a World Heritage Site, by the Monument Mitra Dalmia Bharat Limited through the Adopt-a-Heritage scheme for achieving Corporate Social Responsibility (CSR) goals has caused a backlash from conservation professionals and historians, not to mention the opposition of political parties. However, it is not enough to speculate all that can go wrong with the new model—it is equally necessary to deliberate on how this model may be advantageous for built heritage and what role conservation professionals might play to take proactive charge for careful management of heritage sites.

Art and Culture as CSR Goals by Corporate Houses
Even though government embracing private funding for cultural heritage is a relatively new paradigm, the United Kingdom embraced this as early as 1997. Since 1974, American Express has contributed to preserving more than 500 historic sites.