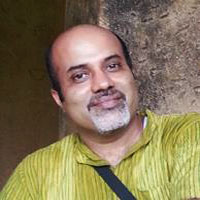 His professional experience over the past 25 years covers a variety of projects from infrastructure works, urban planning to interior design for a very diverse user base from MNCs and diplomatic missions to city authorities. Parallel to the practice he is an active educator, starting as a design studio mentor at his alma mater in Paris, he is at present Professor at the Rachana Sansad’s Academy of Architecture. He is currently a doctoral candidate at the Faculte d’Architecture La Cambre Horta, ULB, Brussels. His research Interest are urbanism and informality.
rohitshinkre@rsarchitects.net
www.rsarchitects.net

In this practice essay, Rohit Shinkre makes his recent renovation and extension of the Lycée Français Internationale de Pondicherry as an opportunity to write about and discuss many questions thrown up in the course of his engagement with the project. He discusses issues such as built spaces as resource, meanings of conservation, renewal, environmental sensitivity and such terms that are used constantly but rarely reflected upon. He makes a simple yet emphatic point that every design project should become a means to debate broader questions about the discipline. Critical reflection can generate a discourse to further design thinking in the practice of architecture

The Lycée Project in Puducherry
The renovation and extension of the Lycée Français Internationale de Pondicherry (LFIP) or the French High-School of Puducherry has been a landmark project for me. Like many architects of my generation The Maurice Merleau-Ponty’s “Phenomenology of Perception” and Robert Venturi’s “Complexity and Contradiction in Architecture” had a profound influence on my approach to architectural design. The idea of architecture being ‘a machine to live in’ though intellectually attractive is a reductive of its potential.

The Lycée occupies a 5800 sq.m. compound in the heart of the White Town of Puducherry which is one of the most actively conserved historic urban precincts in India, thanks to the untiring efforts of the local INTACH chapter. The complex has 4 building blocks, the earliest built, Block A, around mid-19th century, the next, Block B, in the early 20th century – both in load bearing brick walls. Then the Block C in mid-20th century and the last at the turn of the millennium – both in RCC. Ironically, it the last addition that was to be demolished. The project was about renovation and modernisation of parts of the existing historic buildings and an extension for new spaces for the primary school.

This essay is a result of many questions that the project raised and how they informed the design process. Doing a project is not just an exercise in design and execution, it can generate a discourse to further the thinking process in practice of architecture. I discuss some of these questions here.