Why do we need to look back?

Why do we need to look back?

This is the question that Kamu Iyer asks in the opening paragraph of the book, From Diagram to Design, a book that distills five decades of the author’s architectural practice in India. There are more questions that help us locate the book.

What were the key developments post-independence and the decades that followed that influenced the practice of architecture in India? What were the debates around ideas of modernism and the revival of cultural traditions? How did these debates influence the evolution of architectural pedagogy in India?

Kamu Iyer’s earlier book, BoOmbay: From Precincts to Sprawl, an autobiographical and historical construction of Mumbai’s built environment addresses these questions in greater detail. Here, the questions are dealt with briefly and the responses establish the context of both the author’s prolific practice and the reading of the book. Another set of questions draw us in to the content of the book. “What is this book about?”

“Why are such processes, events and experiences worth recalling?”

“What do we mean by a diagram?”

Kamu Iyer looks back and organises a selection of his practice, Architects’ Combine’s works in to five themes: parallel walls, light and shadow, the plus with variants of its core, the screen wall, and the diagonal. This structure reminds me of some other books with thematic groupings as an analytical and narrative tool, and the impact they have had on me as an architect. The monograph of Ten Arquitectos, the practice led by Enrique Norten was the first such book that I encountered and absorbed. It was in sharp contrast to other monographs of that time that had a habit of organising themselves chronologically and/or typologically. Outside of monographs, there are two books from India that come to my mind: Thematic Spaces in Indian Architecture by Kulbushan Jain and Architecture in India Since 1990 by Rahul Mehrotra. These thematic structures act as tools to understand and critically review a work of architecture. However, their scope is not limited to the author’s selection of works or that book. What is beautiful is that you get to take them to other readings of architecture as well.

The thematic structure in this book is not forced on to the architectural work and can be traced to the design process with ease. There are conversations between the client and architect and those within the design team; there are responses to the place and program; and there are architectural precedents within and outside the practice. All of them combine to influence the evolution of the design and the outcome. This process is narrated like a story and also through sketches that are quite characteristic of Kamu Iyer. He calls them ideograms, a drawing or a set of drawings that communicate the deep structure of an architectural idea. As the title of the book suggests, they are critical to the journey of the project.
Ideograms document precedents and typological studies as well as the design alternatives and iterations. They are early stage responses and imaginations and have certain limits. They do not reveal the entire scheme, but present the core of any idea with clarity. We are only treated to those ideograms that are part of the final cut or narrative. One can only speculate about all that was left out and how their rejection must have played a key part in the refinement of the eventual architectural scheme. A restless back and forth produces the final ideogram which then marks the end of a journey within the larger journey of the project. A bit of the romance is lost at this point. The ideogram transitions to more formal drawings and what lies ahead are new challenges that span the development of the design, the construction process and the occupancy of the work.

All the works are further illustrated by formal drawings, in some cases views and construction details, and also photographs. Each work can be viewed in isolation and also as a part of the meta-narrative. In the process, one gets to see origins, continuities and the iterative development of the architectural theme. For me, the highlight was the reading of all the works grouped under the theme of parallel walls. This is how Kamu Iyer explained its origins: “The image of the sea with mighty waves in the distance becoming ripples when they meet the shore prompted the idea of parallel walls; an idea that incubated in my mind and manifested in the design of a house many years later.”

This house is the D P Tamhane House in Mumbai, designed in 1965. The idea then evolves to form the ‘tube’ and the tube form in housing as seen in the case of the two phases (1965 and 1982) of the housing colony for Sandur Manganese and Iron Ores. A diagram of a traditional village house is the starting point and its linear form suggests the idea of the tube. From there one gets to see several iterations of the theme that lead to the final architectural scheme for the colony: a cluster of three ‘tube house’ villages. Another set of diagrams explain the design of fenestrations for the colony. This collection of diagrams along with the drawings and the story make for a delightful recalling of the process and the outcome.

This is how Kamu Iyer explains the importance of the act of recalling: “A project is exciting when it is live in the mind and when it is being built. Once completed, it becomes inert; the ideas and experience gathered become memory from which to draw later.” This book is a document of time and memory. It gives the mind ‘a repository of images, experiences and knowledge’ that can mingle with the present and the future and further the architectural discourse.

At a time when we are overpowered by 3D images and photographs that characterise the social media heavy publishing space in architecture today, it is refreshing to see a book that gives a place of prominence to the diagram. I would have really liked to see a compilation of all the diagrams at the end of the book much like how diagrams that illustrated the concept of light in Louis Kahn’s works were compiled at the end of the book, Light and Space. For a book of this nature, I have a couple of irritations with its design. One, the layouts are far too dense; there is hardly any white space in a chapter and even between chapters. Two, the density problem is compounded by the inconsistent language of the drawings. I do not know the factors that acted upon the publication of the book, but the book could have benefitted with better design.

In writing and publishing books, architects make space for themselves within the discipline and in the intellectual imagination of society. Through his books, Kamu Iyer does just that, giving us memories, insights, and discoveries. The last paragraph in the epilogue of the book quotes Marcel Proust: “The real voyage of discovery consists not in seeking new landscapes but in seeking new eyes”. Iyer proceeds to summarise, “the book presents the ‘known’ through the eyes of the present and hence the voyage is a new one”. This is a highly recommended voyage for those invested in the built environment. 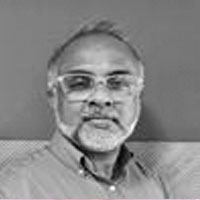 Jinu Kurien is an architect and teacher based out of Navi Mumbai, India. He is an Adjunct Faculty at Pillai College of Architecture where he teaches Humanities and Architectural Theory. He is also the Principal Architect of DesignWorks, an architecture and communication design practice that works extensively in the corporate real estate, education and housing sectors.