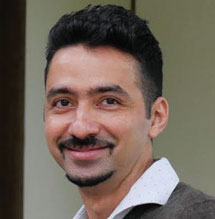 Born in Mumbai, Kaiwan Mehta, is a theorist and critic in the fields of visual culture, architecture, and city studies. Mehta has studied Architecture, Literature, Indian Aesthetics and Cultural Studies. In 2017 he completed his doctoral studies at the Centre for the Study of Culture and Society (CSCS), Bengaluru, Manipal University. He has now published as well as exhibited his research work and ideas internationally. He has authored Alice in Bhuleshwar: Navigating a Mumbai Neighbourhood (Yoda Press, 2009) and The Architecture of I M Kadri (Niyogi, 2016). Since March 2012, he has been the Managing Editor of Domus India (Spenta Multimedia). He is also Professor (adjunct) and coordinator of the Doctoral Programme at the Faculty of Architecture, CEPT, Ahmedabad since 2017. He was the Charles Correa Chair professor, Department of Art and Culture, Government of Goa for the academic year 2017-2018.

Mehta co-curated with Rahul Mehrotra and Ranjit Hoskote the national exhibition on architecture – ‘The State of Architecture: Practices and Processes in India’ (UDRI, 2016); and recent exhibition, ‘The State of Housing – Aspirations, Imaginaries, and Realities in India’ in 2018. He has been elected as the Jury Chairman for two consecutive terms (2015–17 and 2017–2019) for the international artists’ residency programme across 13 disciplines at the Akademie Schloss Solitude in Stuttgart, Germany. He has been curating the Urban Design and Architecture section of the Kala Ghoda Arts Festival, Mumbai since 2016.

Kaiwan Mehta whom I have known for a long time, is a friend, a sounding board and my first editor. In his innings as the editor of Architecture: Time, Space and People, he encouraged me (any many others likewise) to write. I realized as a teacher and a quasi-researcher at that time the importance of writing and the sheer hard work it demands. Kaiwan is one of the rare architects I know who have consistently and productively engaged with history and theory of architecture vide his multi-faceted education, pedagogical practices and his role as a public intellectual shaping a certain discourse in several exciting ways.

In this conversation, I provoke him to reflect on many of his pursuits to draw out the thought processes as well as speculate on the very nature of our discipline we call architecture. He graciously delves at length on each aspect of his practice, shares memories, lays bare rationale, voices opinions – which demand attention regardless of whether one agrees or not. This is a rich offering for anyone interested in alternate ways of engaging with architecture.

DALVI
What are your views on practicing architecture as a discipline today considering that you have engaged with it in multiple ways – as a teacher, researcher, curator and editor?

MEHTA
It is a difficult question to begin this interview with, especially since the role of the architect is seriously under question today. The architect is not perceived within a wider perspective of culture and social imagination, but is seen largely as a lifestyle-designer or a handmaiden to client and real-estate demands. In this context to recover the role of the architect, not only within a socio-cultural perspective, but also within the fraternity and profession has become an important task today. In that sense to be a teacher, editor, critic, curator – you hold the mirror to the profession and the architect. The architect in India is a lost soul in a floating world – her/his recovery is very important.

A discipline is shaped when other jobs and actions within the arena of architecture begin to reflect and produce a discursive space for the practice and the profession; these other jobs demand their own education and training, as well as protocols of practice. So as much as spaces of education, spaces of research and journalism, spaces of institutions of public display are opening up and shaping the arena – the very nascent stage of this discursive arena in India is creating its own problems. Well, it is also not that critics, educators, commentators on architecture were missing in the past. No, they were there, but we have never been able to collate and understand that space and its history, we always saw it as sporadic and very much based on individual acumen and temperament. The disciplinary arena of conversation and critical reflection has not been given its due recognition, and that is necessary for a healthy and productive arena.